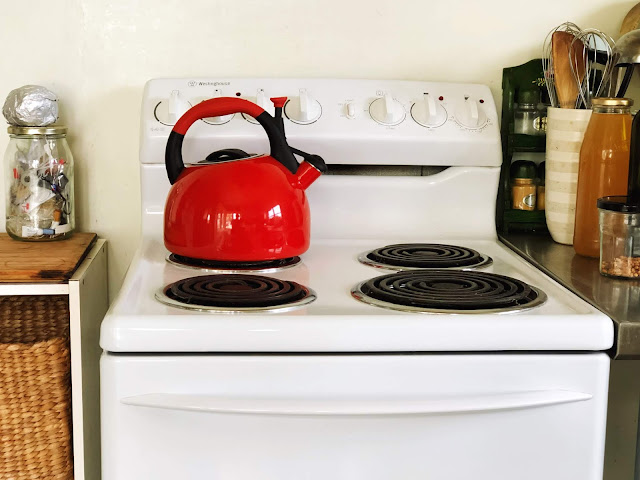 One of the less talked about aspects of waste-free-living is how to deal with large household appliances, and the waste associated with them. Electronic waste from things such as discarded televisions, fridges, mobile phones, dishwashers, ovens and small appliances all add up to a big amount of ‘stuff’ to manage at the end of the life of those items (approx. 73kg eWaste per year for the average Aussie household). The rise of eWaste has many drivers; one being the planned obsolescence trend, encouraging people to buy the new model and throw away the ‘old’ one, and the availability of interest free deals, as well as the trend in poorer quality electronic items being made. Large whitegoods used to last for over 20 years, but these days new models will often have a much shorter life spans of only 2 to 5 years.

We've had the opportunity to really examine our e-waste this past 18 months, with most of our larger appliances slowly dying. It's been an expensive and thought-provoking time. Each time something has broken, the decision-making process has had a slightly different outcome, which reminds us that there's no one correct fit for every family and situation.

Our flashy electric Euromaid oven stopped working properly in January. It was only about 5 years old, and the second one we'd had in that time, as the door fell off the first one while it was still under warranty. We watched, horrified, as they casually wheeled a new stove in to replace a small broken hinge. And so this time, we faced the dilemma of what to do next. As usual, we referred to the to the waste hierarchy (Refuse, reduce, reuse, recycle...) to help us formulate our plan, and here's how it went:

Refuse – We couldn't really refuse the oven in this case. We need ‘something’ to cook our food in/on. We reframed our thinking around cooking and energy use, and explored the option of buying a sturdy wood-fired stove and oven (i.e. refusing a standard electric one), which could be set up to heat our water and heat our home. The pros were low energy bill, great heating, and having an appliance that was likely to last for decades, avoiding planned obsolescence. And there's just something about a wood stove... The cons were the high initial cost, the increased time needed to maintain a wood cooker, the difficulty the owlets might have in learning to cook on a wood stove and how that might translate once they left the nest, and the layout of our house meant a retrofit to wood cooking was not ideal. There was also uncertainty around the efficiency (or potentially harmful impacts) of wood, versus the availability of hydroelectricity (another renewable source) from the main grid. After much research and consideration (and a little sadness!), we decided against that option.

Reduce -  In this case, we couldn’t really reduce from one oven without not having one at all. But, for these past 9 months we have reduced, to an extent. We continued to use the tiny top oven/griller as best we could (as the main bottom oven was broken), and we used the still-functioning stove top. This did mean that we were a little bit hampered in what we could cook and in the amount of cooking we could do at any one time. No homemade pizzas or big batches of biscuits. No baked dessert!  Or if we did want to cook those things, we needed to have the oven on for longer to cook multiple foods, which would be less energy and time efficient. In our waste-free day to day, the oven is an important tool, as so many things are prepared from scratch. Not having a functioning, large oven was making things not so easy. The final straw was when the inner walls of the small working oven fell away!

Reuse (and repair) - When we had a repair person out to look at the broken oven and dishwasher (which we couldn't repair either and decided not to replace), the quotes we received for fixing the oven suggested that the cost of repair would be almost as much as the cost of a new oven, with no certainty of longevity even after repair.  This was where we learned about the short expected lifespan of many new models – most are made from cheaper-quality components and not designed with repair in mind (or models where replacement parts are only available if expensively bought from overseas). We were assured that 5-6 years is a decent innings for an appliance these days.

After a little more research, we found a local business that takes broken second-hand kitchen appliances and repairs them for resale. In the case of stoves, we discovered they only really take Westinghouse ovens, as these are one of the few brands that can be easily repaired in Australia. For example, switches on Westinghouse ovens have been known to blow after some years of use, and many people discard the whole unit, instead of paying the $70 or so for a replacement switch. Also, many units are discarded when rental homes change tenants, or when home owners want to renovate or ‘upgrade’ the kitchen. So, we found a model that suited us and got it delivered and installed for less than half the cost of buying and installing a new model, and less than it cost to repair our old stove.

Recycle - An electrician came and took our broken oven away. The old unit will be used for parts, and what’s left will go to scrap metal recycling (Recycling being lower down on the waste hierarchy). The secondhand unit that we bought even comes with a 3-months parts and labour warranty, so we've got a little time to see how well it works and test it out.

The Verdict
We were happy that we could buy secondhand. It made sense for us to support a local business that had established because the owner was sick of seeing so many appliances go to landfill, and sought to address that. Sometimes going to those superstores like Harvey Norman just feel so at odds with our efforts to reduce waste. With our second-hand unit, we can avoid the waste associated with the production of a brand new appliance. We avoiding the transport waste (fuel) to ship a new appliance (or its components) from overseas. We avoiding packaging associated with a new appliance (usually polystyrene, flexible plastic, some rigid plastic tags or guards, and a big cardboard box). That waste tends to be out of sight, until the new appliance is inside your home.

We chose a model that we understand to be relatively fixable, that we could afford (and find). There are higher-end models that are repairable, but then you have to weigh up the cost of the appliance with the cost of repair (which might be expensive for fancy European models). We also chose a model that's a little smaller and more efficient to run than our previous model. It looks as if the oven and griller have never been used. It's sturdy, unlike many of the new stoves we saw available new, and like every stove we've ever cooked on in every rental property, and even this home for the first 5 years. It's cute and certainly a little bit retro (harkening back to the era when our house was built), and seems like a downgrade from the stove we had before. It's a little juggle to fit all the pots, but it's doable and the oven is the same size as before. It has fewer bells and whistles than most new stoves you can buy, but we see that as a good thing. No clock to struggle with at daylight savings time. No specialty settings. A light that turns on with a switch, and a timer that works when you turn it and doesn't require a full understanding of the manual. The owlets love hearing it go 'ding' when the cake is ready. And it's as clean as a whistle!

What We Learned
As usual, the waste hierarchy was useful in working through the problem of replacing a broken appliance. Beyond the Rs, we find it also helps to think about the hidden waste - the energy used and waste produced in getting the prospective item to you, and what waste might result when you’re done with it. If you can, look for secondhand, look for locally made, look for durability and repairability, look for good energy-efficiency, and consider functionality (does it meet your needs?) – you may not need all the bells and whistles! And, always look for recycling services, if you have electronic waste that is beyond repair or reuse. Apparently the Victorian Government intends to ban eWaste to landfill by 1st July 2019. We're hoping that Tasmania will follow suit. Ideally, we'd love to see businesses being more transparent about their products' planned obsolescence, so we can avoid so much waste in the first place. Until then, it's a task of assessing each situation as it arises and often making some compromises before finding a solution that works for your wallet and your practical needs.